“I think that my best qualities as a hockey player would be my speed and my passing”. At 5-feet, 2-inches and 110-pounds, Alexandra Neryueva has the proper build to be a speedster for Arctik Universitet hockey club in Russia’s WHL (ЖХЛ). “In saying that though, I think that I am a more defensive player, but am also able to try and help in the attack”. Neryueva is a 20-year old, left-handed shooter and she plans on being a part of the WHL for many years to come. Neryueva and I have been chatting over the past couple of days, and she has been kind enough to share with me a bit of her story and her “hockey history”.

Born May 5th, 1996, Neryueva is from the regional area of Moscow known as Moscow Oblast, but is currently living in and playing hockey in the city of Ukhta; an industrial town that is about a 20-hour drive northeast of Moscow. According to Neryueva, “There are many opportunities to play hockey in both Moscow and in Ukhta. The sport continues to develop in both cities. I was 11-years old when I started playing hockey. In my family my older brother started playing hockey first, and when I saw his games I also wanted to give it a try. At first my parents didn’t allow me to play, but eventually I was allowed to. After the first training that I had I really enjoyed it and I decided to continue playing hockey for life”. Her commitment to this decision has never wavered since, and Neryueva’s career has only grown and blossomed further because of it. So much so that she now is a professional hockey player.

“I follow both the NHL and the KHL”, she tells me. “From Russia, I like Pavel Datsyuk and Artemi Panarin, and from abroad I like Sidney Crosby and Steven Stamkos. In Russia my favorite team is CSKA Moscow, and abroad my favorite team is the Pittsburgh Penguins. I like the tactics and styles of both of these teams and their professionalism”. Pavel Datsyuk ranks in my own top-five favorite hockey players, so I definitely appreciate Neryueva’s affinity for arguably the craftiest wizard with a puck that has ever played. I am also a bit jealous that Datsyuk has decided to finish his hall of fame career in Russia, and that Neryueva gets to see him far more regularly than I do now. But I guess fair is fair.

While she was still in her teenage years, Alexandra Neryueva would play her junior hockey for Atlant Odintsovo; a team from Moscow Oblast. During that time she would have the unique opportunity to represent her country at the 2014 Women’s U18 World Championships in Budapest, Hungary. Though Russia posted a record of 2-wins and 1-loss in the tournament, they would end with a fourth place finish after losing to the Czech Republic in the bronze medal game. Neryueva would play in all six games of tournament and score a goal in the quarterfinals against Finland in order to advance Russia into the semifinals versus Canada. Neryueva’s tally ended a deadlock with the Finns with just under 10-minutes left and was the decisive game-winning goal, putting Russia ahead to stay in a 3-1 victory. “For me the most special moment in my career thus far was getting to play for this youth team for Russia”. The international experience was invaluable, and further vaulted her readiness to play in the top women’s league of her homeland.

“When I grew up from junior league, I was invited to play with Kometa Mozhaysk“. Kometa was part of the women’s Russian Championship league, which was the precursor to the professional WHL. “Kometa was located in Odintsovo, so that was how I originally got into playing with the top women’s league in Russia”. Neryueva would spend two years with Kometa before the club ceased operations.

With the newly formed WHL set to begin play for the 2015-16 season, it would be no real surprise that a team would snatch up Neryueva to add her to their roster. “Two years ago when my previous club was shut down, Arctik Universitet called me and offered me a contract. I immediately agreed to sign!”. In Neryueva’s first season with Arctik she played in all 24-regular season games for the team. She would also finish in the top ten for team scoring 4-goals and 3-assists for 7-points on the season.

Speaking on the WHL experience, Neryueva tells me, “I think what makes playing in the league so enjoyable is the emotions of the girls, and the struggles and challenges that are felt between the players and the teams”. I will routinely watch the WHL games on my phone and the rivalries between the seven clubs that comprise the league is indeed intense. Now in the 2016-17 season, Neryueva continues her solid performance for Arctik and really strives to be the best player she can be for her teammates. In 28-games this season she has posted 3-goals and 2-assists.

What has impressed me most in talking with Alexandra Neryueva is not the fact that she plays in the WHL, nor that she scored a game-winning goal in an IIHF World Championship. Rather, it is her kind spirit and a love that she has for her family. Neryueva sent me a number of different photos to use for this article. Among them are photos with her mom and dad, and a photo with her three brothers. For Neryueva, the love and support of her family is what matters most to her and even makes her a better hockey player. “For me it’s important that my parents are proud of me, and that I become a good professional player and reach the best heights that I am able”. It would seem to me that although her parents initially were hesitant in allowing her to play hockey, that they are now most certainly very proud of their daughter and what she is accomplishing.

She expounds upon this more heartfelt side of playing hockey. “I have learned that there are a lot of good people in life, there are beautiful places, and that if you want your dream to come true then you need to work hard. You can never give up; you need to strive for more. Love your family and cherish it. Believe in yourself. You need to appreciate life, and if in your life there is a sport like hockey, it will make your life that much more interesting. And at the moment, hockey is a part of me which I really love!”

There are a large number of little girls in Russia who emulate players like Neryueva. And perhaps their parents might have some initial misgivings about their daughters playing hockey too. Neryueva shares her thoughts on this with me. “I would tell little girls to believe in themselves and to strive to develop in all directions of life. Sports like hockey can help you to find yourself, develop your character, find new friends and see many new cities. I wish all of them luck and hope that they make good achievements!”.

Special thanks and love to Alexandra’s parents and brothers which are depicted below: 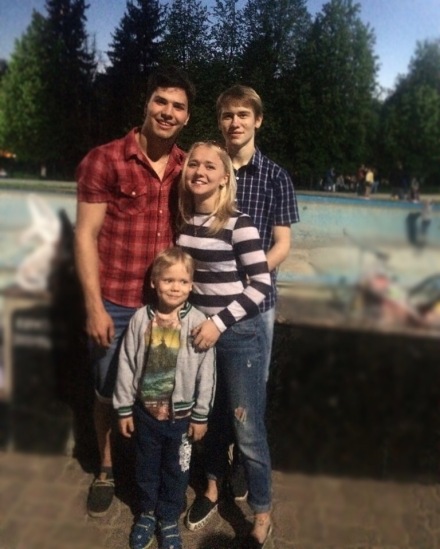 Musings of a Hockey Enthusiast

Promote Your Page Too