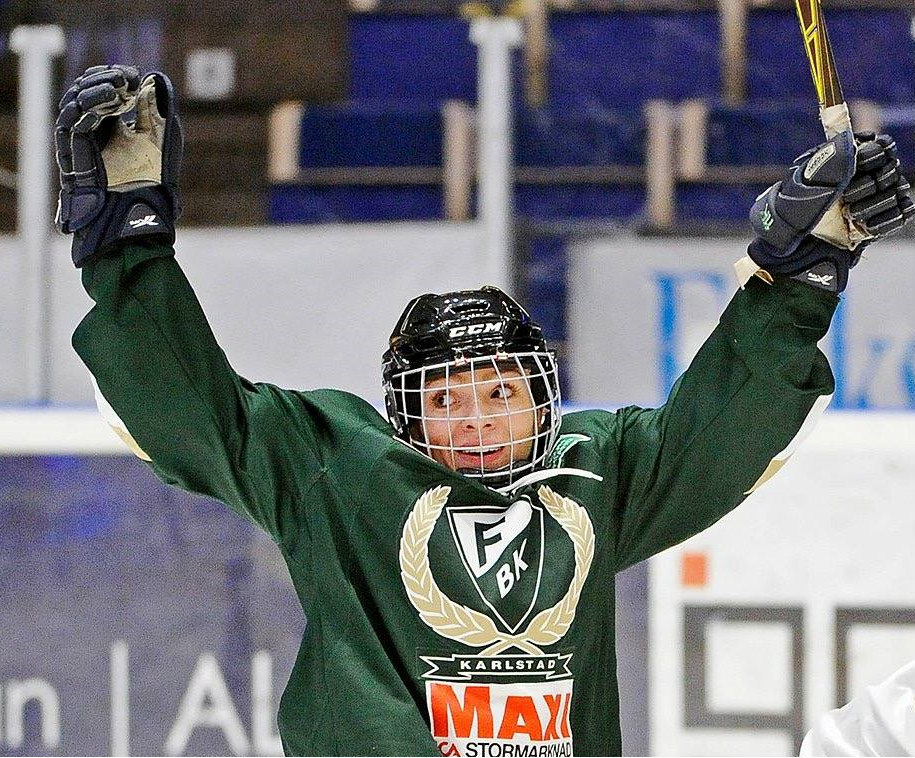 While she tells me that her favorite hockey players are a fellow countryman and arguably the most recognized player presently in women’s hockey, I liken Henriette Behn’s style of play to more of a robust forward who is not afraid to take a puck to the inside of the thigh or the shaft of a stick plastered across the back. Say, a Tomas Holmstrom. Or a Johan Franzen. She has net presence. “My hockey heroes are Hilary Knight and Mats Zuccarello. I wouldn’t say that I am a sniper, no. I would say that I am more of a hardworking type of player. A player who you can put in front of the opponent’s net to screen the goalie and make space for my teammates”. And thus far in her young career, Henriette Behn has done a very admirable job of that.

Born New Year’s Eve of 1998, Behn’s passion for the game was initially instilled in her by her father. “I was four years old when I attended my first hockey school, and then I joined an actual team later that same year. It was my dad who introduced me to the sport. The fact that he was a hockey coach at that time made me become interested in trying it”. Behn hails from the city of Oslo; the capital and most populous city in the country of Norway.

One of the top hockey clubs in the city of Oslo is Vålerenga, and Behn was able to grow through the ranks of their program since her earliest ages in the game. “I played for Vålerenga’s boys team from when I was five until I was thirteen”, at which age Behn was old enough to play in Norway’s women’s elite league. Having already been a member of Vålerenga for such a considerable length of time, it was only natural that Behn joined their women’s team. “There are six teams in Norway’s women’s league, in the elite series”, she explains. “Vålerenga performed good during the 5-years I played with the team. We always managed to put together a good group of hardworking players who all had a winning mindset. Often our results led us to leading the entire league”. Across those 5-years, Behn appeared in 46-career games in the Norwegian women’s league for Vålerenga and tallied 12-goals and 6-assists.

It was during this time with Vålerenga that Henriette Behn had the opportunity to represent her country in three consecutive Women’s U18 Division-I Championships as a member of the Norwegian national team; each opportunity having been a true honor for her. “It meant a lot to me. You feel a special type of pride when wearing your nation’s jersey, and you naturally always feel very honored when representing your own country by doing something that you love”. I like how Behn recognizes the value of this, and maybe sees it a step further than many athletes. Not only did she have three opportunities (thus far) to represent Norway on the international hockey stage, but she did so – and she was the one to say it – by doing something that she truly loves. Rarer of an opportunity still. When you can combine skill with love and channel it into one focus, one mindset, it is an experience that so few get to feel. And Behn has achieved a trifecta of sorts in that respect.

Behn’s first go-round in this particular IIHF tournament was in 2014 for the games in Füssen, Germany.  Barely 15-years old at the time, Behn would play in all 5-tournament games for the Norwegian team. But seeing limited ice time likely due to her age and experience level, Behn more so utilized this first tournament to gain invaluable experience for future tournaments ahead; the likes of which she could not have foreseen the dividends it would eventually pay. “That first tournament was a motivation to me because it was my first time on the national team. The speed in the games and the tempo in general was much faster than I was used to in Norway. So this was definitely something that helped prepare me for future international tournaments”. In the 5-games Behn was held pointless and the Norwegians would finish fourth overall with 2-wins and 3-losses.

Then came 2015. And for Behn and Team Norway, it would be a tournament for the ages. A full tournament already under her belt, Behn tied for the team lead in goal scoring with 3-goals and a whopping 25-percent shooting percentage throughout the tournament. For a second year player on the national team who does not consider herself a sniper, she was on fire. Describing her mindset when she is in the game, Behn tells me “I’m a player who hates to loose; the coach can expect that I always give 100-percent in the games that I play”. The fire in her belly sparked Norway to a 3-1-1 tournament finish and the silver medal at the games in Vaujany, France.

Arguably though for Behn, the most exciting moment of the series came when she scored the game tying goal against Slovakia with only 32-seconds left in the game to send it to overtime; firing a loose puck past goaltender Olga Jablonovska. After an extra session was played and no decisive winner, the two teams went to a shootout which saw the Norwegians come away with 5-4 victory, well on their way to the silver. Describing that pinnacle moment in which she scored, Behn recalls, “That game was thrilling because the intensity was just so high! I remember I was put on the ice towards the end of regulation so that I could screen the goalie. I remember thinking that I just had to score. When I got that shot from my teammate and managed to score on that rebound, that is a feeling that I cannot even describe”.

And how could she? Once again, it comes down to rarity that few ever get to experience. A tying goal against another nation that keeps your own country’s medal hopes alive. But this is a prime example of Behn’s net presence and when it mattered the most. She also is able to put that medal run into perspective for me. “To win that silver medal was an amazing experience. That meant a lot to me and it’s something I will never forget. Our team was strong that season, and everyone was motivated to show what we really could do. I think this team spirit and the fact that I was in really good shape that season led me to having such strong tournament”.

2016 was Behn’s final U18 tournament appearance and Norway could not recreate their success from the year prior. For Behn, recognizing that it was her last tournament at this particular level was a slightly surreal experience even though she enjoyed it as a whole. “I thought it was a good tournament because that year there were many new players in the group. But of course, it was kind of weird knowing it was my final tournament with the U18 team”. Maybe even somewhat ironic too, that her final statistics from the tournament are incorrect, which she jokingly points out. “I had two goals in that tournament”, she laughs; “the stats are wrong”. Officially, the IIHF has her down as having 1-goal and 1-assist in the 5-game tournament. Norway finished fourth overall with another record of 2-wins and 3-losses.

Though these were Behn’s last U18 appearances on the Norwegian national team, they are likely not her last for Norway, nor does she expect them to be. “I was actually in Hungary with the Norwegian national team back in November (2016), so I hope that I will have the opportunity to play for them going forward. This is something I work hard towards and have in mind every time I workout, so it is definitely something that I am striving for”.

So while she is actively preparing herself for the next opportunity to play for her homeland, what is Henriette Behn’s current status in hockey? Färjestad BK; a hockey club in Sweden that is one tier lower than their Swedish elite women’s hockey league. Asked about the decision to leave the familiar confines of Vålerenga, Behn tells me that she opted for Färjestad BK to further develop her skill level. “I was looking for a more challenging season, and wanted to develop myself even more. As a hockey player this is naturally something you always strive for. Therefore, I was contacted by the Färjestad BK’s coach and received an offer to play there this season. I felt like this was an appropriate league for me where I could develop”.

And does Behn hold out hope that Färjestad BK may even be promoted to Sweden’s top women’s league? “Yes, there is a possibility that my team will be promoted to the top league. This is what we are working for during the season, so it will definitely be cool to see how we will do in these qualifications. For my part, I definitely want to work hard to reach this goal. And that is to play in the top Swedish women’s league!”. In 6-games this season with Färjestad BK, Behn has 2-goals and 2-assists.

It is interesting to see how this young lady, who knows her way around the front of the net, has no issues with trudging through the trenches in order to better herself. She gets it. She has it figured out. I do not really like the adage of “what doesn’t kill you makes you stronger”. It is far too overused and has lost its meaning. But there is something to be said about paying ones dues (to snatch a different phrase). It seems that Henriette Behn has found the proper niche where she can not only challenge herself physically on the ice, but where she also can have an attainable goal in her sights. And while that goal is an attainable one, it is not something that she can just skate right up to and take whenever she pleases. “Nothing comes easy”, she tells me. “You have to put in effort and hard work to get where you want to. And you have to sacrifice a lot of things to reach your goals. But hard work always pays off in the end”.

Musings of a Hockey Enthusiast

Promote Your Page Too